ActionAid, in partnership with local organisations across Mozambique, Zimbabwe and Malawi, quickly mobilised teams to respond to the crisis.

Through the generous donations of our supporters, ActionAid was able to reach an estimated 12,000 people in the immediate aftermath of the cyclone. The initial response focused on women’s protection, including establishing Women Friendly Spaces (WFS), seeds for agriculture and education support, also ensuring children had materials and clothing to continue their studies.

ActionAid has begun long-term recovery programming across the region, continuing to build on our protection work and utilising the safe spaces for women and girls to provide counselling services, training on sexual and reproductive health rights and awareness raising on gender-based violence (GBV). We are working to rehabilitate water and sanitation hygiene (WASH) facilities across communities and schools, providing psychosocial and educational support to women and children in the affected communities as well as planning agricultural management for the upcoming crop season. Hilda is one of 10 female leaders in the community who empowered women affected by Cyclone Idai with protection and leadership skills that will enable them to recover from the effects of the disaster and build their long-term resilience in the face of disasters. Photo: ActionAid

Women and girls are the most affected by emergencies, 14 times more likely to die in a disaster than men but are often the first responders. It is critical to support women to be decision makers at all levels of humanitarian action as they are the best positioned to identify their needs and those of the broader community.

As a part of the women’s protection objective for ActionAid Zimbabwe’s Cyclone Idai Response, 10 women from Chimanimani and Chipinge between the ages of 23 and 62 attended a Women Led Community Based Protection training facilitated by ActionAid in June 2019. These 10 women, supported by ActionAid and our local Zimbabwean partner Jekesa Pfungwa, will facilitate in setting up safe spaces to be used by the community to discuss the issues affecting them in the aftermath of Cyclone Idai. They will lead the discussions as trained leaders, raising awareness on protection and disaster preparedness measures, reaching an expected 1,000 women throughout Chimanimani and Chipinge.

“I will train women not to wait for food handouts. They can plant crops on the land that was not destroyed by Cyclone Idai. Now that roads have been cleared the women can engage in various income generating activities such as buying stuff on demand in Mozambique which is close by and selling them in Chimanimani. This will ensure that they are not vulnerable to gender-based violence (GBV)” – Hilda.

Moving forward, we will continue to work alongside the affected communities throughout the long-term recovery period, supporting to rebuild lives and create positive change. 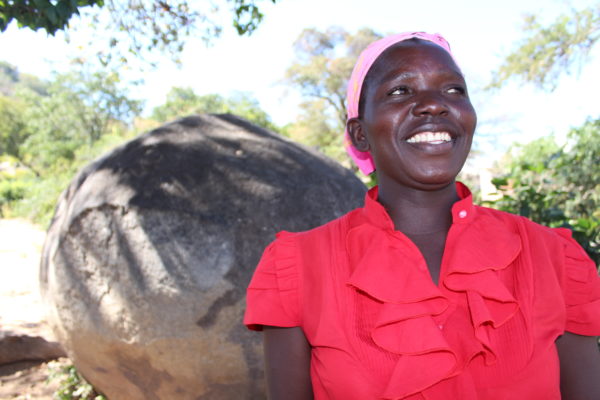 Coddie is a member of the Disaster Risk Reduction Committee in her community, an intervention set up by ActionAid to provide leadership and awareness raising opportunities to women affected by disasters. Photo: ActionAid